Instant and Delayed Gratification in the Math Classroom

After a long day at work, would you rather: order a pizza, or put in a bit more effort and make a healthy meal?

We present this dilemma to you not to make you hungry, but to lead you into the story of the Marshmallow experiment. In 1970, a group of scientists at Stanford conducted an experiment on preschoolers. One by one, the children were brought into an empty room, except for one table and a chair. On the table, there was a plate with one marshmallow waiting for them. The child was offered two options- eat the marshmallow immediately, or wait a bit and get two marshmallows later. The examiner would then leave the room, and the child was left alone to contemplate.

This was a big challenge for the participants. Some of them covered their eyes trying not to see the marshmallow, others were singing in order to distract themselves. For part of the group, these techniques worked, and they were able to wait around fifteen minutes for the return of the examiner. Others were less successful, and ended up eating their marshmallow right away.

So, what was the point of putting the children through such a difficult choice? The Marshmallow experiment was designed to test if there is a correlation between the participants’ early age self-control, and their academic success later on in life. It was suspected that the children with stronger self-control would show better results in their tests (for example SAT) throughout the years. The results initially did confirm a correlation between the two, proving that children that showed more self-discipline had greater academic accomplishments as adults.

Later research pointed out many weaknesses of the experiment. Other researchers struggled to get the same results and confirm what was previously found.


Instant and delayed gratification in the math classroom

Although not without flaws, the Marshmallow experiment played a significant role in modern psychology. The initial experiment was conducted on children, but adults can also be tempted with the same choice. Even today, this topic is being discussed and poses an interesting dilemma: is it better to get a small reward right away, or is it worth sitting that one out for a bigger reward later on?

One thing this experiment did bring to light is the concept and differences between instant gratification, and its opposite, delayed gratification.

Instant gratification can be described as the temptation, resulting tendency, to forgo a future benefit in order to obtain a less rewarding but more immediate benefit (positivepsychology.com). In the math classroom, this means that a student would choose not to do an assignment that was offered for extra credit, and rather stick to what’s mandatory.

On the other hand, delayed gratification is the ability to forgo an immediate reward in anticipation of getting a better reward later on. It requires more self-control, the ability to see the bigger picture and “keep the eye on the prize”. A student with the need for delayed gratification would volunteer to prepare a presentation for the class, instead of just learning the chapter for themselves. Even though it would take him/her additional time and effort, they estimate that the reward from the teacher and overall sense of accomplishment would be worth it.

Choosing the easier option is not necessarily a bad thing. Our lives are filled out with responsibilities and chores, and after a long day of making all the good decisions, we can let ourselves “slip up” a bit. Just being aware of what influences our choices already gives us an upper hand in understanding our nature, and using this knowledge to our advantage.


Implications of instant and delayed gratification in the math classroom

What do these findings mean for math students and educators? If you are a math teacher, chances are that some students in your class will be leaning more towards instant gratification, and others towards delayed gratification. The point is not to change all the students to strive for delayed gratification. Just being mindful of these differences can make the learning process in your math classrooms easier for you and your students.

Students who are aiming for instant gratification might be more motivated by short-term goals that require a bit less effort. There is a risk that they will get distracted if the goal is set too far into the future, or requires a lot of work during a longer period of time. They might give up or stop putting in much effort. A good solution would be to break down bigger goals into smaller objectives. When the student accomplishes each of the smaller objectives, they will still feel rewarded and accomplished. Each completed task will assure them that they are on the right track, and motivate them to keep working towards the bigger goal. This ties in with the mastery based learning that we covered in this article, where we explain the benefits of breaking down a bigger problem into smaller concepts and skill sets.

In a real life math classroom, this could mean that before scheduling a big midterm test, students can be given a couple of smaller tests leading up to the big one. That way, students still have the big test in mind, and they will be actively preparing for it by doing all the smaller tests.

In contrast, students with a need for delayed gratification will seek more challenging goals, and might lose interest if the goal seems too easy. These students might have higher standards for their own success, and the feeling of accomplishment will not come easy to them. For this group of students, it would be better to offer an opportunity for them to show their efforts through a more difficult project. For example, these students could become peer educators, their role being to help other students with their studies. That way, they would keep being challenged and demonstrate their skills through a longer period of time.

Many theories and research confirmed the positive influence that feedback has on our development and learning. Some go as far as saying that all of our behavior is just a consequence of the feedback we get. We have also previously covered the topic of feedback, and the influence it can have onto math anxiety. There is no doubt that students benefit from it, but in the context of instant and delayed gratification, giving feedback to different types of students might be tricky.

Students who are leaning towards delayed gratification might not enjoy being praised/critiqued for each and every step they make. Especially if the feedback is mostly positive, it might come off unwarranted and meaningless. If the students don’t feel like the action deserved praise, they will also not enjoy it. Additionally, getting many rewards for smaller accomplishments could take away from the reward they get for a bigger achievement.

It is good to keep in mind that, although some students might enjoy constant feedback and a lot of praise, others can find it demotivating.


What does SOWISO do to support students with both instant and delayed gratification needs?

Over the last 10+ years, our platform has been providing plenty of visuals that assure students of their learning progress. For example, on the home page, the overall score and progress of the student is shown. These two show the success of the student on the whole platform, so they could be more appealing for students motivated by delayed gratification. To improve these two numbers, it takes time and significant effort.

Students can also see their progress on the chapter level. Since it covers a smaller unit, this kind of feedback is less intimidating and the goal seems more achievable. If the symbol is green, the student knows that their effort paid off, and can get a little confidence boost to keep learning.

Besides that, after each step of the exercise, students get automated feedback. This allows for a more personal learning experience where the student gets a virtual praise or a tip for each answer they give. This is a useful feature for students who need more support. 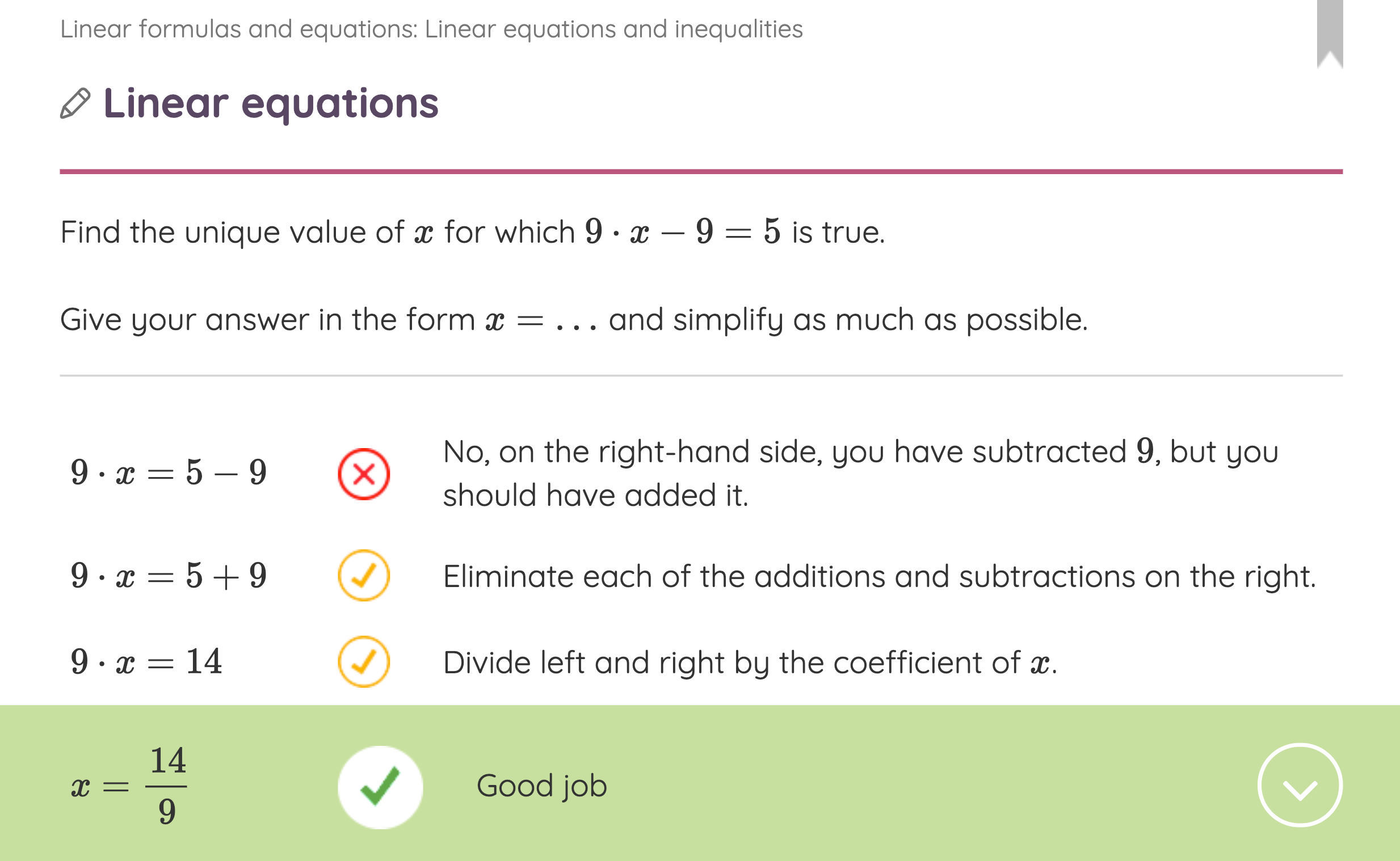 Overall, all the visual feedback is included in the platform to help students see where they are in their learning process. And because of the different levels of feedback, it can be appealing to both students with the need for instant, and delayed gratification.